John’s activities in Schenectady are hard to trace during those early years, but he did save some letters from a clergyman and his family, with whom he spent considerable time – teaching the youngsters how to operate an electric train, making a bob-sled for them to enjoy in the snow, and taking them to the circus. John  lived in a boarding house and made some lasting friendships among the other boarders. We know of other activities because of photographs he and others took – documenting their trips into the Adirondack Park, as well as to Canada and New England. He began a lifelong love affair with Lake George early on, and by 1907 had purchased a canoe, spending most weekends camping on islands in the Narrows, and enthusiastically promoting new forms of recreation, such as skiing and skate-sailing. He also began to take an interest in the problems threatening the beautiful forests and lakes, and started gathering information about forest fires, erosion, and lax oversight by government officials. By 1908 his career at GE was off to a good start, and when his father died and left him with a modest inheritance, the young engineer began planning a strategy for addressing the problems he had been noticing, at Lake George and in the Adirondack Park, and recruiting others to help.

1904-1905 – Friendship develops between John and a clergyman (A. Russell Stevenson) and his family, and John enjoys interacting with their boys – by making them a toboggan, taking them to the circus, and helping Alex learn how to operate an electric train.

1906 – John invites his sister, Nancy to pay a visit to Schenectady, and they take a camping trip through the Fulton Chain. They also make a trip to Lake George, where John is already taking an interest in camping and boating in the Narrows.

July 1908 – John has been promoted within the Power and Mining Engineering Department at GE, with several men working under him.

September 1908 – John hears about a meeting of the Bolton Improvement Association and takes an interest in the efforts of several prominent landowners to preserve the natural areas of Lake George. About the same time he decides to begin riprapping the shores of Dollar Island, recruiting friends from GE to help haul rocks, using boats in summer and sleds in winter. 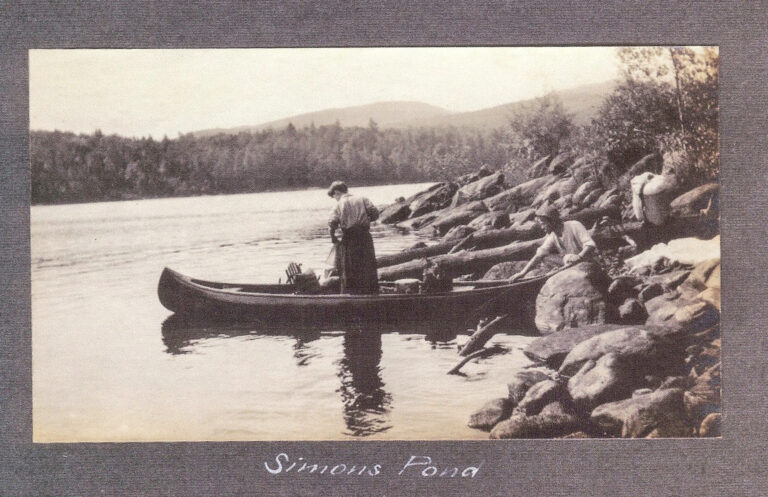 Rev. Alexander R. Stephenson – a clergyman in Schenectady, took an interest in the young engineer, inviting him to dinner with his family, and Apperson must have been glad to connect with such a nice family. One of the boys, Alex, Jr., became a pilot, and he became friends with Ted Dreier. There may have been any number of other young people who admired John Apperson, but very few of them actually corresponded with him, so we don’t know their names. Nancy Apperson, John’s sister, made a trip north to visit, and they made a canoe trip into the Adirondacks, Marc Hanna, apparently a distant cousin of the Appersons from Illinois, accompanied them on the trip. Nancy saved her photos and made them into an album, along with postcards she collected. Nancy married Ralph Dickinson in 1907, and John corresponded with him, known as “Dick” for many years. Hull Apperson, John’s brother, left GE in 1904 and moved to Norfolk, Virginia to find employment with the Southeastern Underwriters Association. He married Sallie Duncan “Dunc” Apperson in 1905, and they announced the birth of their first baby, Martha,  in 1907. Dr. Apperson, in Marion, wrote a letter to baby Martha.