Ellen Apperson Brown, who grew up hearing so much about her great uncle (John Apperson) and Lake George, has spent much of her adult life trying to understand the political and cultural context of Apperson’s legacy, to be able to pass along to others what she has learned.

About twenty years ago, she made photocopies of around 4 cubic feet of papers from the Apperson archives (then stored in the Adirondack Research Library, in Niskayuna), and has also done extensive research on Apperson’s family and childhood, in Southwest Virginia. She is thrilled to now have a book of Apperson’s photographs published, in May 2017 (John Apperson’s Lake George, by Arcadia Publishers) and hopes to find a suitable publisher for a longer, scholarly biography.

Meanwhile, she hopes this website will help to recruit students and scholars to help her create this digital archive, and to provide a resource for all those interested in New York’s early environmental history. 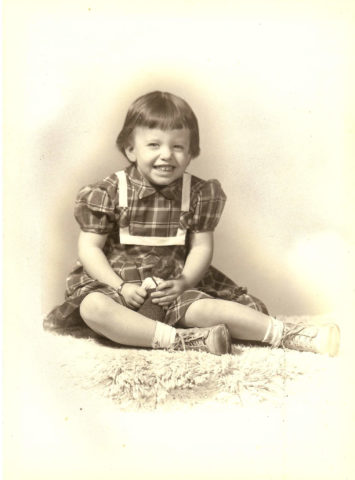 At the time of this photo, Ellen Apperson was living in Schenectady, on Clifton Park Road, where her father, John S. Apperson, III, was employed at GE, as an engineer. By that time his Uncle John had retired from his job at GE (after 47 years), and was spending most of his time at his camp in Huddle Bay, at Lake George.

Ellen remembers swimming in Tadpole Bay, as a toddler, and later being allowed to swim way out to the buoy, and back ( about 100 yards). She and her brothers were all trained in the proper techniques for washing dishes (using Ivory Snow Flakes), and they always made sure to dive down and pick up rocks from the bottom, and throw them up along the shore.

When her family moved away, first to Erie, Pennsylvania, and then to Charlotte, North Carolina, they could hardly wait to get back up to the lake, to check on Uncle John, and help him with his many projects. Ellen was twelve years old when Appy died, in 1963.

In the 1980s, Ellen began thinking about writing her great uncle’s biography, a project that turned into a daunting challenge. His papers were stored in Schenectady, in a little library known as the Adirondack Research Library, so she spent a week there, in 1996, making photocopies of the early letters. Then it took another twenty years to get her book published – John Apperson’s Lake George, by Arcadia Publishing.

In 2011, Union College strengthened its historic relationship with the Adirondacks by purchasing the former home of conservationist Paul Schaefer. The home, located in nearby Niskayuna, houses the Adirondack Research Library, which boasts a unique collection of material on the Adirondack Park and the New York State Forest Preserve, including rare books, maps, photographs, documents and the personal papers of some of the region’s foremost conservationists.

The result is the Kelly Adirondack Center at Union College, which offers exciting opportunities to advance Union’s understanding of the mountains, wilderness and waterways of this tremendous natural resource. The Center allows Union to affirm its long connection with the Adirondacks, preserve the educational mission that has been central to the Adirondack Research Library and increase our curricular and co-curricular programming related to the Adirondacks.

A word of thanks to my creative team, especially Andrew Layton for his amazing layout and design and to Laura A. Lee, for her endless enthusiasm, promoting this collaborative history project. Thanks, too, to the members of the Dome Island committee, who helped us get some initial funding from the Nature Conservancy. We hope other organizations will be inspired to become sponsors.