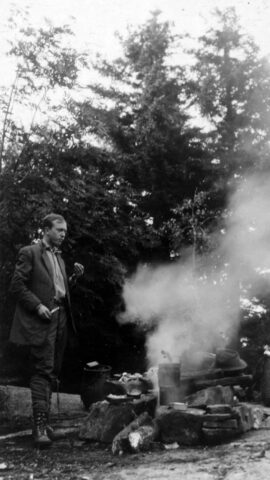 Warwick Carpenter started his career as an author, publishing stories about the Adirondacks, and had a deep appreciation for the healthy benefits of fresh air and exercise. He had health problems in his twenties, and discovered that hiking and camping were exactly what he needed to get stronger. By 1916 he had found employment with the New York State Conservation Department, working on publications there, and within a few years had been offered the job as Secretary for the Conservation Commission. He loved exploring the vast expanse of the Adirondack Park, and made it his goal to see as many places as possible, first hand. He promoted the use of photography as a way to document the scenes and conditions he found, and soon other state officials took up a similar interest in photography. He may have met John Apperson at the Constitutional Convention, 1915, and must have been delighted to find someone else with the same passion about the out-of-doors, and with the same concerns about the forest fires, logging, and unregulated development of state lands. When Apperson tried to get the legislature to pass a bill providing money for rip-rapping the shores of islands at Lake George, Carpenter apparently decided to come see for himself. Soon an article came out in The Conservationist, telling the story of how a young man had organized volunteers to help save the Dollar Islands, by hauling rocks and building protective walls.

The two men worked closely together for the following several years, and together they uncovered evidence of unlawful lumber activities on state-owned land, in the Forest Preserve, that should have been protected by the forever wild clause of the N. Y. Constitution. Both men were enthusiastic about the formation of the Adirondack Mountain Club, and hoped that the club would take a stand against the destruction of forests in the high peaks. Carpenter produced a booklet, using photographs of his own as well as a few from John Apperson, asking the organization to adopt a policy to protect forests and uphold the Constitution. This document was provided to the club’s first slate of officers and board members, at their first meeting. Carpenter and Apperson even met with Franklin D. Roosevelt at a meeting in his home in New York City, and enlisted his approval and support. The Board of Directors, however, was made up predominantly of people with ties to the lumber industry (professors of forestry and prominent owners of lumber companies), so Carpenter’s Memorial was rejected. John Apperson then spoke up to defend Carpenter’s position, delivering a “minority report.”  However, the motion was defeated, and the club’s conservation committee remained loyal to the lumber industry for about seven years, despite Apperson’s persistent efforts to the contrary.

Carpenter lost his job at the Conservation Department in 1922, and his boss there, Commissioner George D. Pratt, who had been sympathetic with the cause of protecting the high peaks, was also forced to resign.  Pratt continued to stay involved with the Adirondack Mountain Club, and encouraged the use of Johns Brook as an ideal place for building a lodge for the use of members. Carpenter, however, could not find a good position in New York State, and moved to California, to Santa Barbara, and found work as a publisher. John Apperson thus lost an important ally and friend, and had to carry on his political battles without his help. They corresponded, though, and in the 1940’s, when he was trying to gather evidence against the International Paper Company, in the case known as the Lake George Water Trespass Case, Apperson asked Carpenter for advice.

Search the the Apperson Archives for more about Warwick S. Carpenter