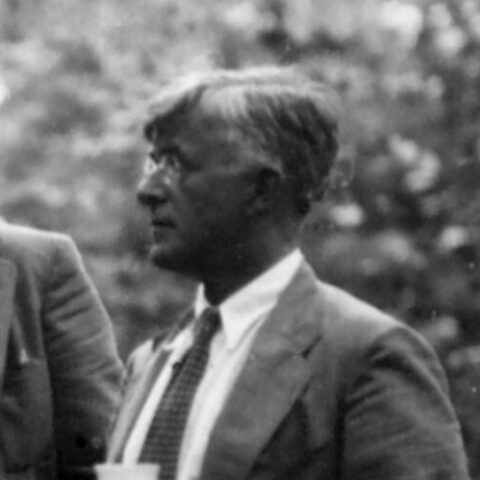 Irving Langmuir’s name was associated with John Apperson in many ways. These two became friends in 1910, when Langmuir first came to work as a scientist at the General Electric Company. He soon heard about John Apperson and his reputation for hiking and other rigorous out-door sports. Langmuir had spent time in Europe and had learned to love skiing in the Alps, so it wasn’t long before these men planned an excursion in the high peaks of the Adirondacks, on skis. They shared an appreciation and a concern for the beautiful scenery, and partnered in various ways to try and protect it. There are many Langmuir letters in the Apperson archives, illustrating their shared interests, and explaining how the two men conspired to fight legal battles and connect with others of power and influence to defend the “forever wild” clause of the constitution.  They opposed legislation that would have promoted commercial logging and development within the Forest Preserve, and blew the whistle on corruption within the state government and elected officials. Langmuir graciously provided funding for several of Apperson’s pet projects, including the purchase of Dome Island, the fund for a Dome Island Sanctuary (the Nature Conservancy), and for a fund to create a memorial for George Foster Peabody, on French Point. Irving and his wife, Marion, also purchased of various small parcels of land in Huddle Bay and in Turtle Bay, at Lake George, adjacent to lots that Apperson owned, thus giving them opportunities to collaborate in person.

The following list of letters gives a nice overview of their shared interests:

Search the the Apperson Archives for more about Irving Langmuir