This is the story of one man’s efforts to adopt an island, and of his realization that he could save many more! His enthusiasm and devotion led him to become a leading advocate for wilderness and preservation. His accomplishments, and his strategies, may serve as inspiration for others who have fallen in love with a special place and wonder what they might be able to do… 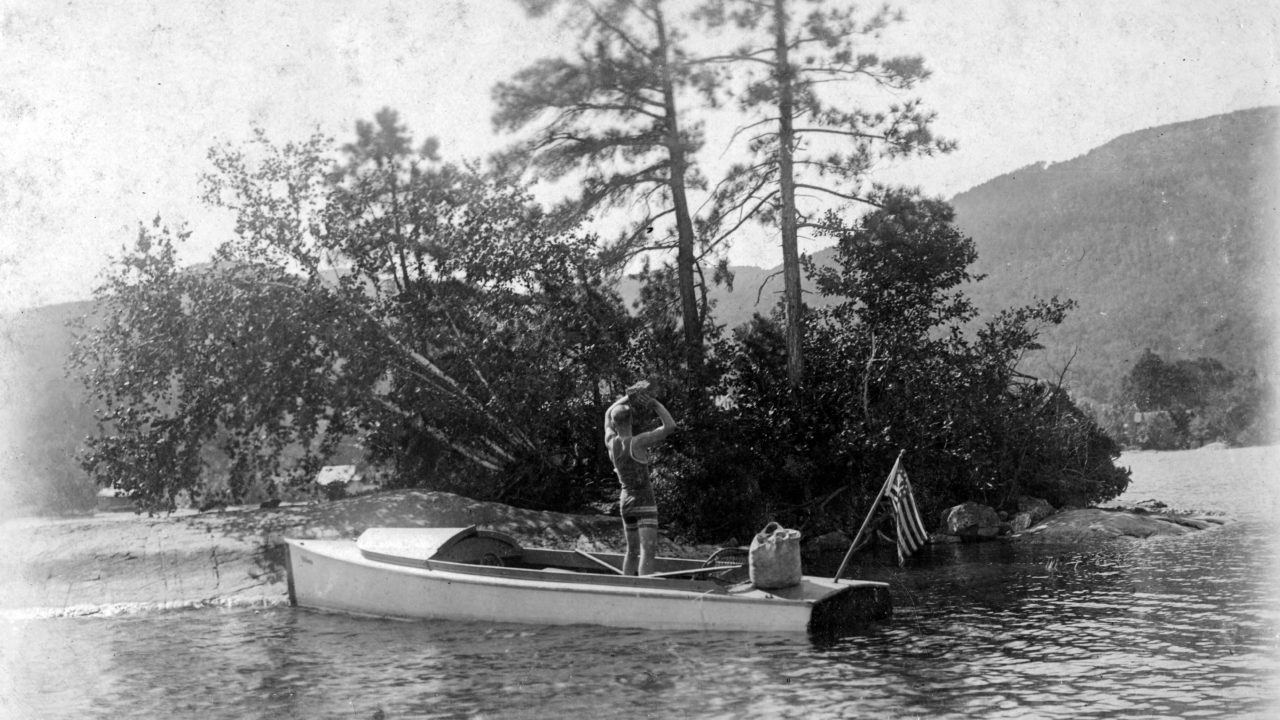 John S. Apperson, Jr. (1878-1963) grew up in Southwest Virginia. He attended classes at the Virginia Polytechnic Institute in Blacksburg, but dropped out to take a job with the Marion and Rye Valley Railroad, where he personally supervised hundreds of workers, all before the age of twenty-one. 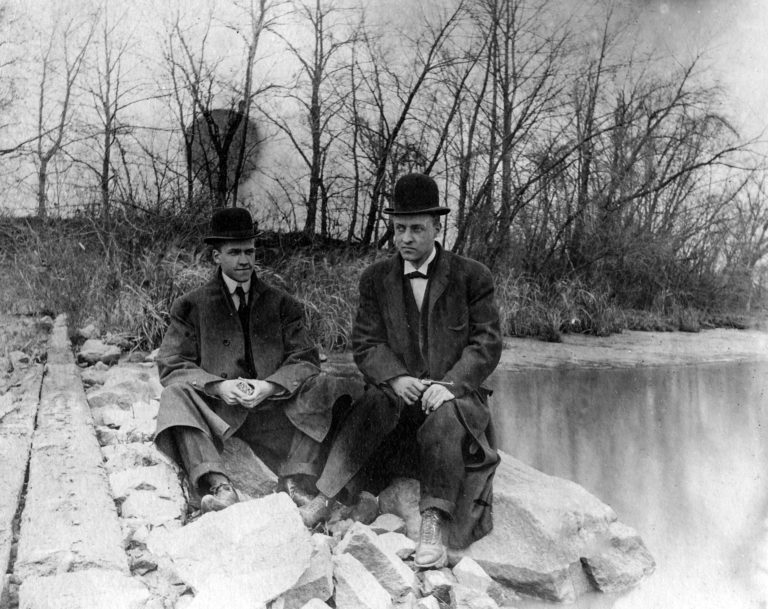 John Apperson (left) and his brother, Hull, look a little uneasy sitting on a railroad tie in the middle of nowhere, in this ca. 1900 photo. Note John is holding a rock and Hull a pistol!

John and his older brother, Hull, moved to Schenectady in 1900.  John soon found his way into the engineering training program at GE (General Electric). By 1918 he had risen to a top level management position in Power and Mining. 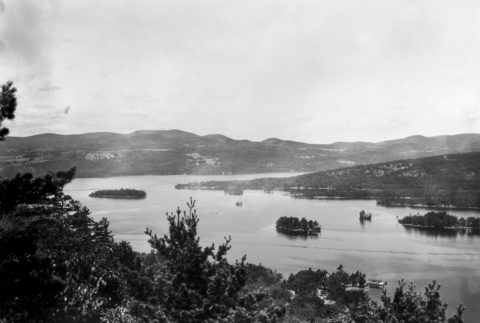 John, started making weekend trips into the Forest Preserve, traveling by train. Like so many other young men working in Schenectady, John longed to get out of the city, and began exploring the forests and mountains of the NY Forest Preserve.

He particularly loved hiking and camping, even in the winter, on the islands of Lake George. He discovered he had a passion for exotic winter sports, such as skate-sailing and skiing. And he soon earned a reputation around GE as the go-to person for recreation in the Adirondacks, and especially at Lake George. 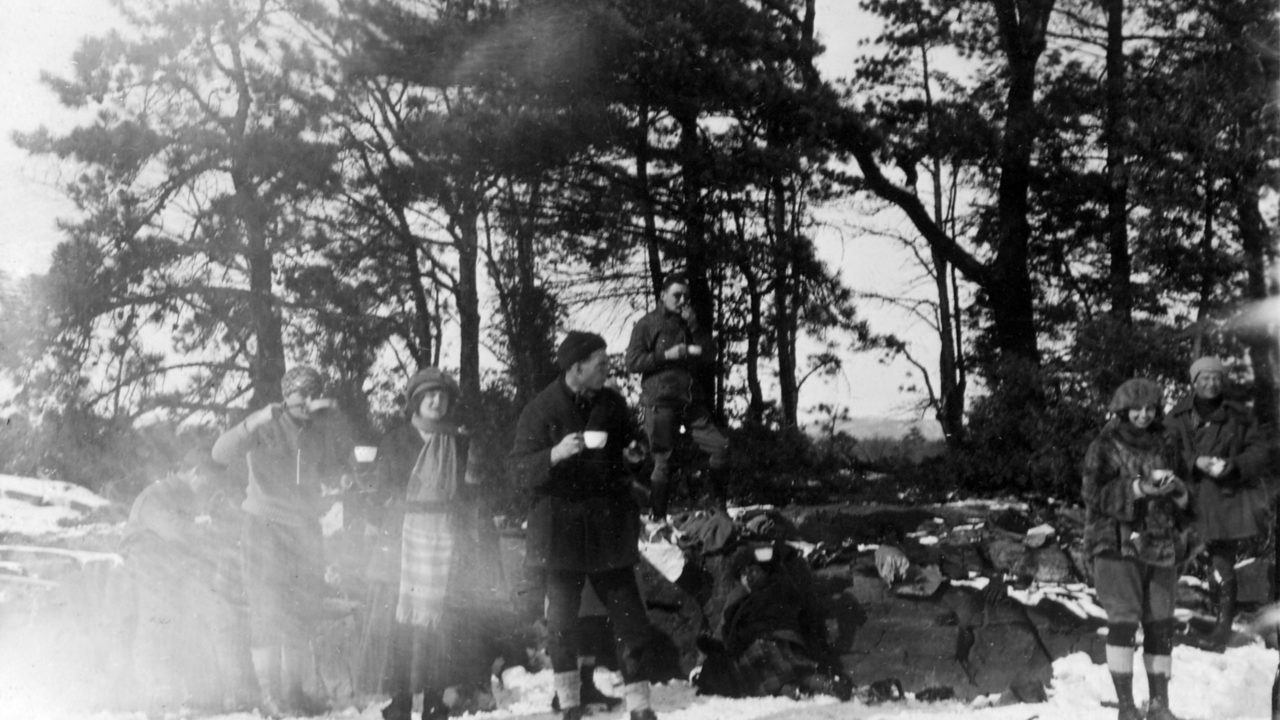 Apperson promoted year-round recreation at Lake George. Even in the Winter, a time when people would normally spend away from the wilderness, Apperson encouraged and arranged for his friends to camp on the islands. 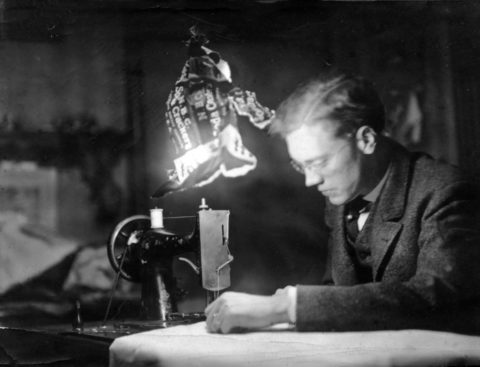 Apperson and his friends would design and sew their own sails, tents, and sleeping bags – as demonstrated here, Robert E. Doherty, is shown sewing with a makeshift lamp shade to block the glare from the light bulb.

Back in Schenectady, during the week, many of these same friends spent their evenings at Apperson’s boarding house, making skate-sails and sleeping bags. These camping enthusiasts, including women too, must have enjoyed the novelty and adventure of learning to cook over an open fire and participate in exotic new sports, such as skate sailing. 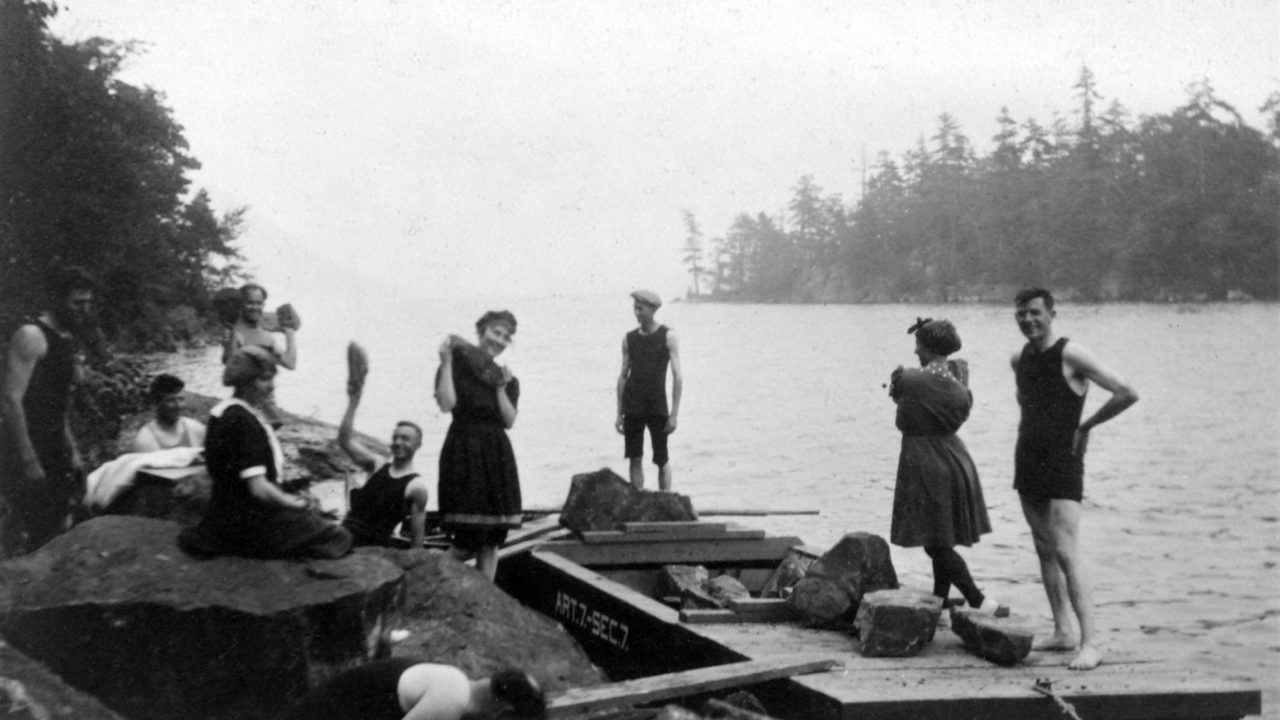 Approved in 1894, a clause in the New York State Constitution, commonly known as the “forever wild” clause, granted some of the highest protection to New York’s Forest Preserve lands – including Lake George and its islands and shoreline. 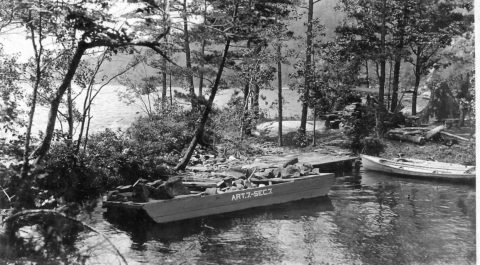 Article 7 – Section 7 of the New York State Constitution (commonly known as the “forever wild” clause) inspired Apperson to name his barge the ART.7.-SEC.7.

Apperson developed a clever strategy to address the problem. Having been the foreman of a branch railroad in Southwest Virginia, Apperson knew of a technique using rip-rapping, or piles of rocks or gravel, to prevent erosion around railroads – maybe it could work to prevent the erosion on the islands of Lake George. 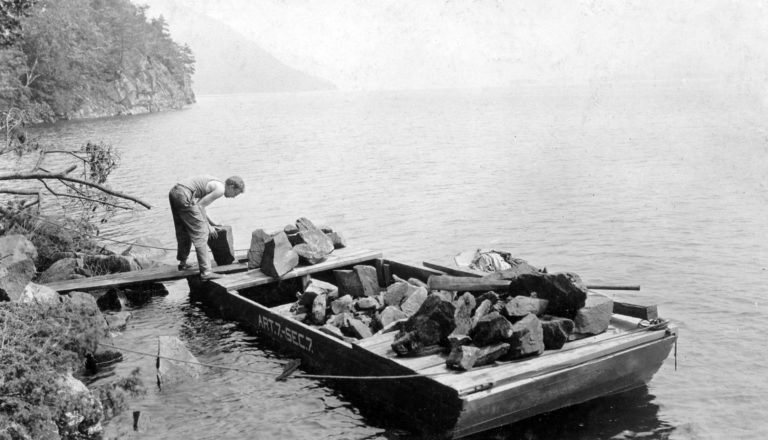 This photo of Apperson loading his barge with rocks was, along with a story of Apperson’s rock-piling project, was published in the Conservationist magazine in 1918.

He began inviting friends to spend a weekend or a summer vacation in the islands, asking them, in return, to bring at least one rock per visit (or perhaps a boatload) as a gesture of appreciation. Of course, once his friends were there, it was easy to ask them to help with some manual labor: moving rocks, and constructing rock walls around the shores. By 1916, he reported that 311 people, from 14 countries and 21 states, had helped him repair many islands at Lake George.

New York State must have been impressed because it soon appropriated $10,000 to repair the shores of scores of state owned islands. Using barges in the summer and horse-drawn sleds in the winter, volunteers protected the Dollar Islands and then moved on to other trouble spots in the Narrows.

By 1917, Apperson’s advocacy had stirred up support in Albany, and $10,000 was set aside to hire D&H Steamboat crews to continue the rip-rapping project during the off season. 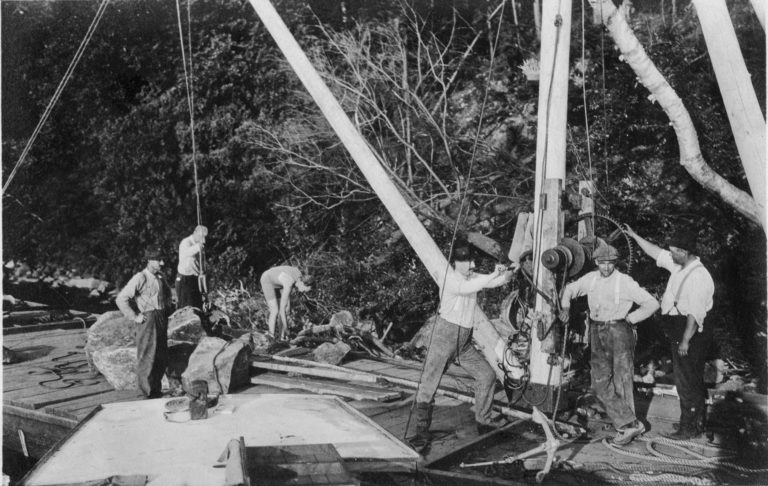 After the state funding in 1917, Apperson suddenly had an impressive workforce and a barge fitted with beam and pulleys. This photo shows Apperson (third from left, in a bathing suit) and the hired D&H Railroad workers lifting and transporting large bolders. 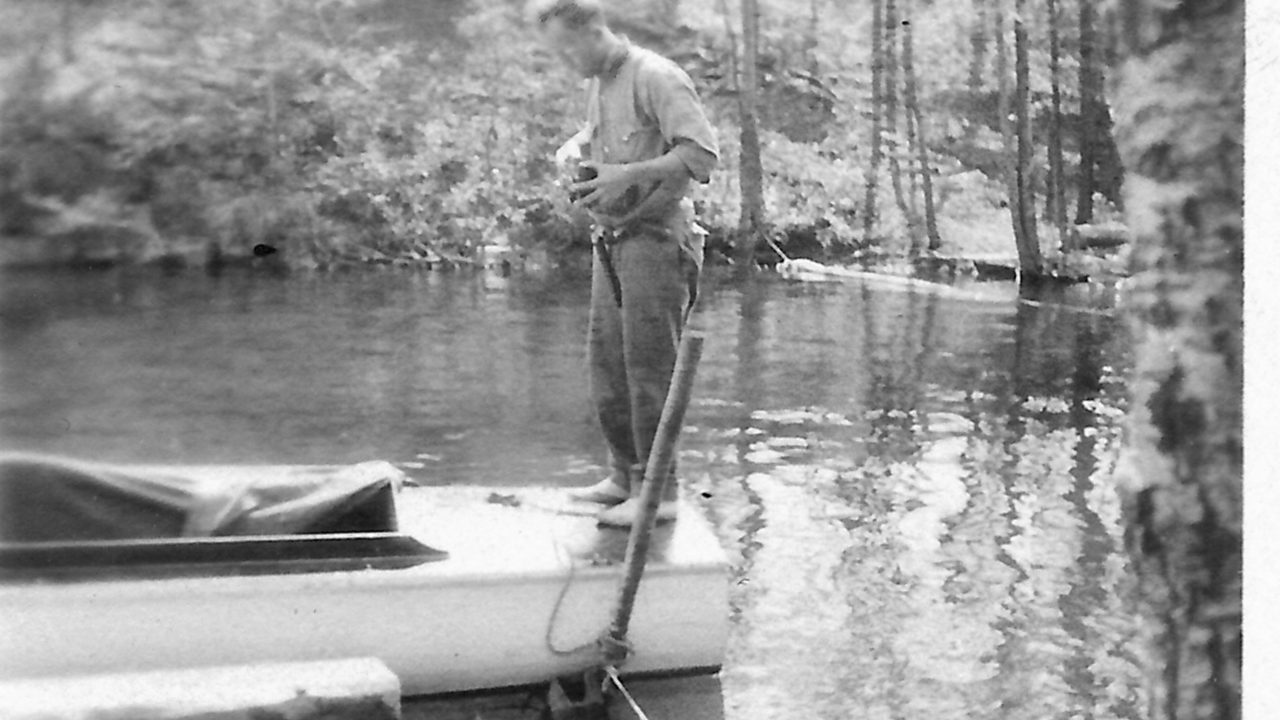 Many of Apperson’s friends took up photography as a hobby, and Apperson purchased his first camera in 1909. He began capturing images, first on glass plates and later on film.  Eventually he found a practical use for these images, publishing many of them in pamphlets, as a way to educate the public about the problems he found around Lake George. 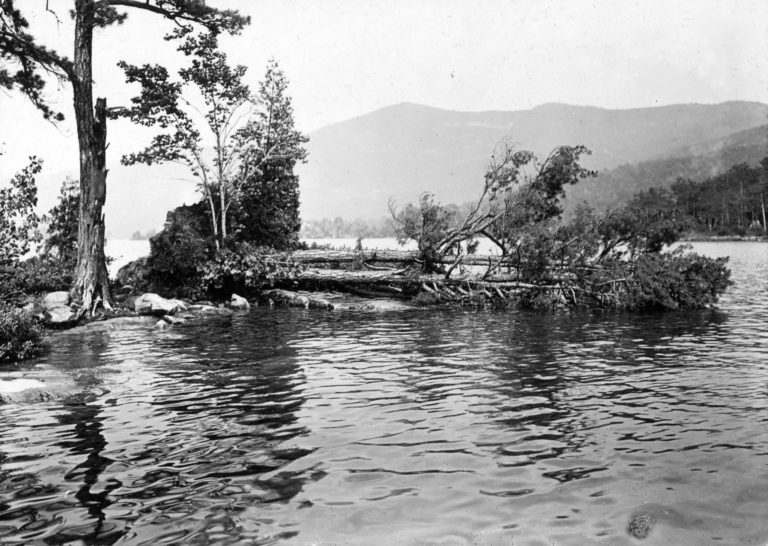 Apperson used photography to record evidence of flooding and erosion on Lake George. This photo shows the effects of rising water on the trees of this island.

Many of his photographs provided crucial evidence in court, showing docks under water, trees falling into the lake, and of islands that gradually disappeared from view, with buoys to mark the spot where rocks provided a hazard to navigation.

Apperson’s work in protecting the islands of Lake George got the attention of Warwick Carpenter, Secretary for the Conservation Commission. They became close friends, and started publishing photographs and stories promoting camping and recreation, but also alerting the pubic to threats to “forever wild.”

Together, the two friends became watchdogs and whistleblowers until 1921, when Carpenter was fired from his position as Secretary. But Apperson continued on as a defender of “forever wild” and the natural beauty of Lake George.

In the 1980s, Ellen Apperson Brown, grand niece of John Apperson (though she always knew him as “Appy”), began thinking about writing her great uncle’s biography – a project that turned into a daunting challenge. Her great uncle’s papers were stored in Schenectady, in a little library known as the Adirondack Research Library. She spent a week there in 1996, making photocopies of the early letters, and has been pouring over them ever since.

Her decades-long dream was brought to new heights in 2017, when she got her story published – John Apperson’s Lake George, by Arcadia Publishing – and she began, this website, Adirondack Activism: John Apperson’s Story. 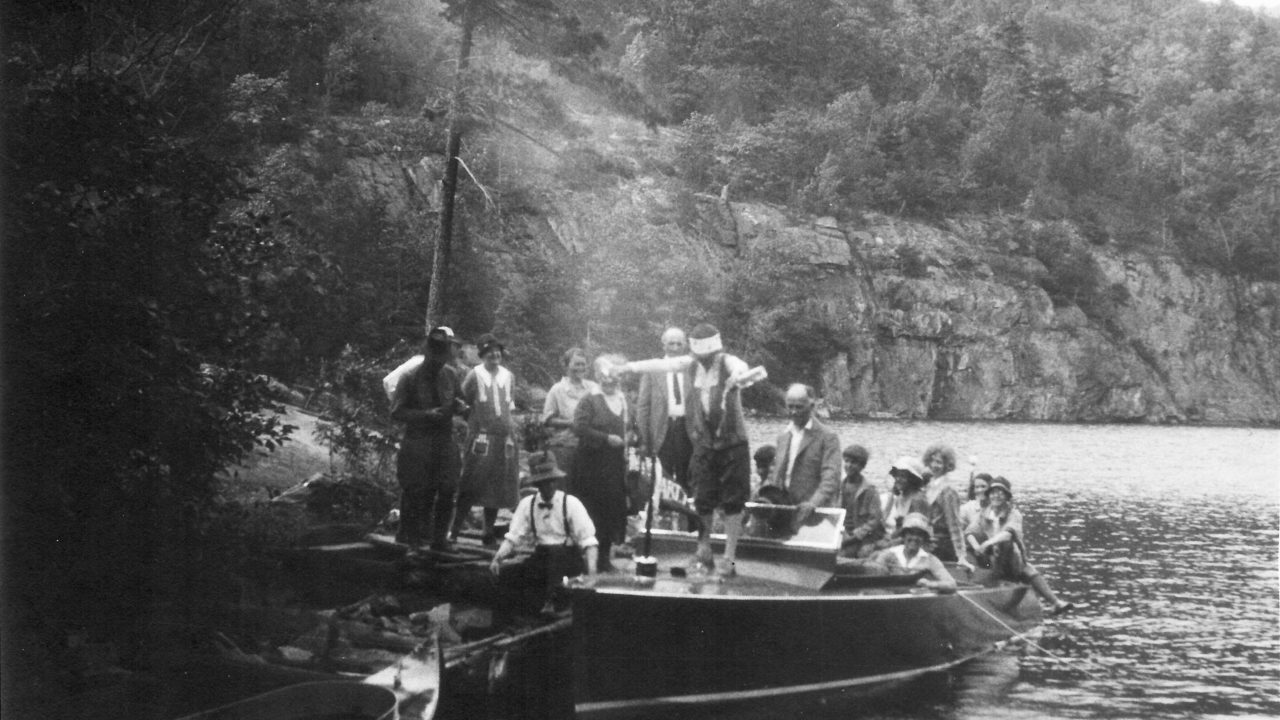 Celebrating our website, as a first step toward launching our history project.

In 1927, when John Apperson wanted to celebrate the purchase of his fancy, new Chris-Craft boat, he invited about twenty siblings, nieces and nephews from Virginia to come to Lake George for a visit. They brought a bottle of mineral water from Staley’s Creek, and held a christening ceremony in the Narrows.

Now, ninety years later, we are celebrating our new website… as a way to tell Apperson’s story.

You May Also Enjoy